The pictures below show a Vector 3 "almost" all-in-one computer I restored. The floppy drives are external in individual cabinets and obtain power from the main computer. The Vector 3 is completely S-100 based using a standard Vector Graphic board set that was also used in products based on the MZ "mainframe" chassis (see below).  This board set provides a 4MHz Z80 CPU, 64K of DRAM (56K used), and a high-resolution 80x24 character display with some limited graphic capability. The Vector 3 was shipped with CP/M 2.2 as the operating system.


The external Unistor floppy drive cabinets each house a Tandon 100-4M drive (DSQD). The floppy controller is a hard sector controller with a disk layout using 256 byte sectors, 16 sectors per track, 77 sectors per side, yielding 616K of storage per diskette. The Tandon drives could read and write the hard sector disks written on the Micropolis controller and drives that were part of many Vector Graphic systems. However, the Tandon drive provided twice the storage space of the Micropolis and a ten-fold improvement in step rate. Both of these drives are 100 tracks per inch as established by Micropolis instead of the more common 96 tpi that the industry eventually settled on.
The Vector 3 was available in several configurations, the primary difference being the type and number of disk drives provided. The configuration pictured here with two Tandon floppy drives is the "VIP-T" configuration. 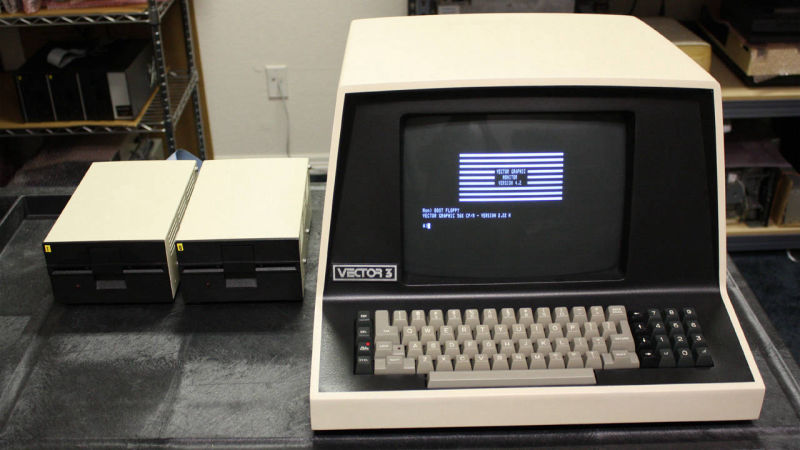 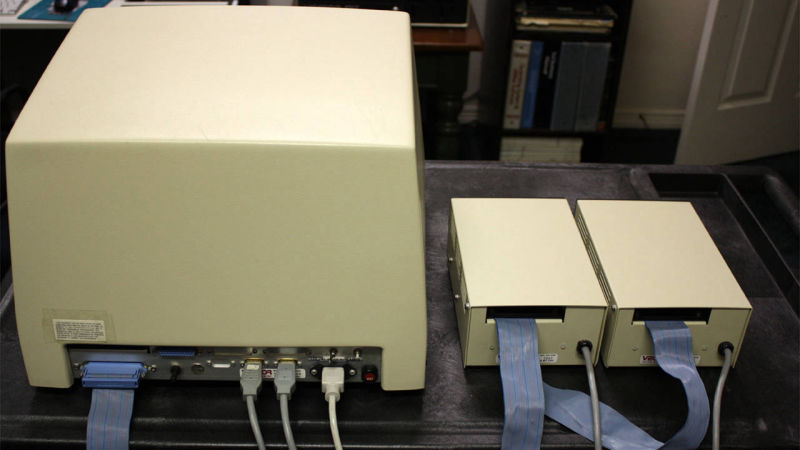 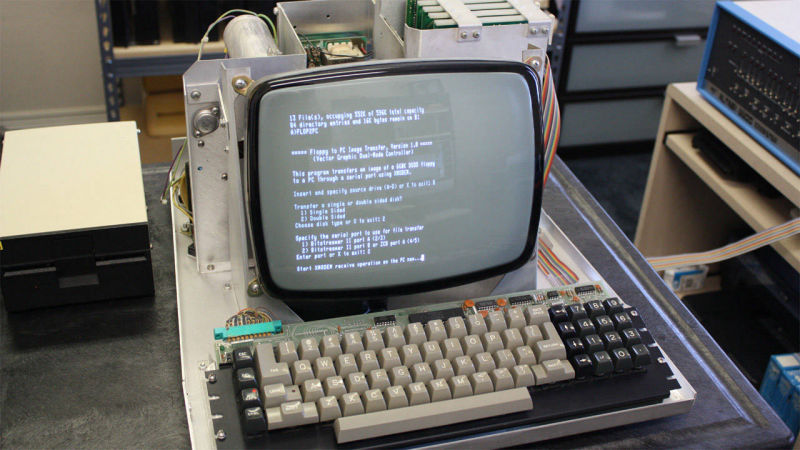 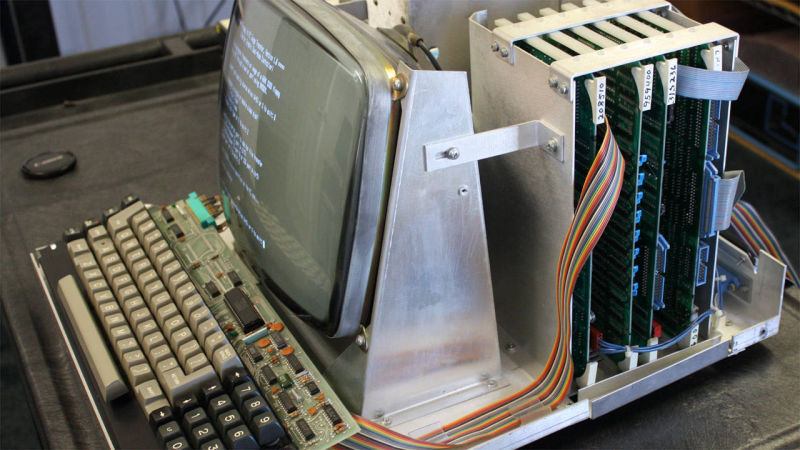 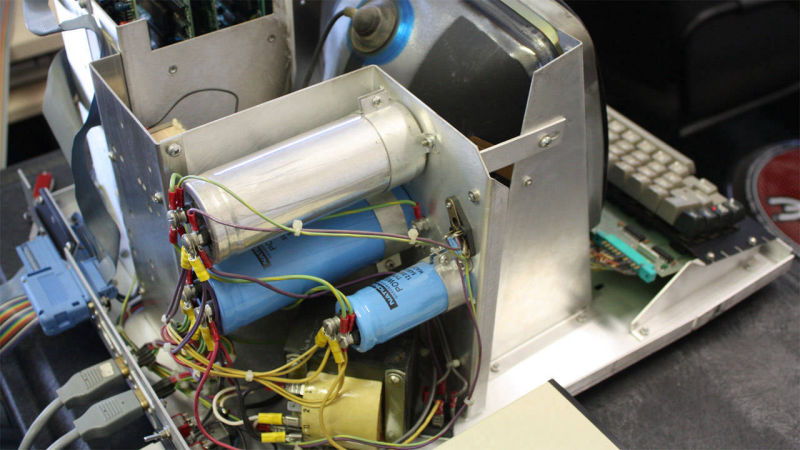 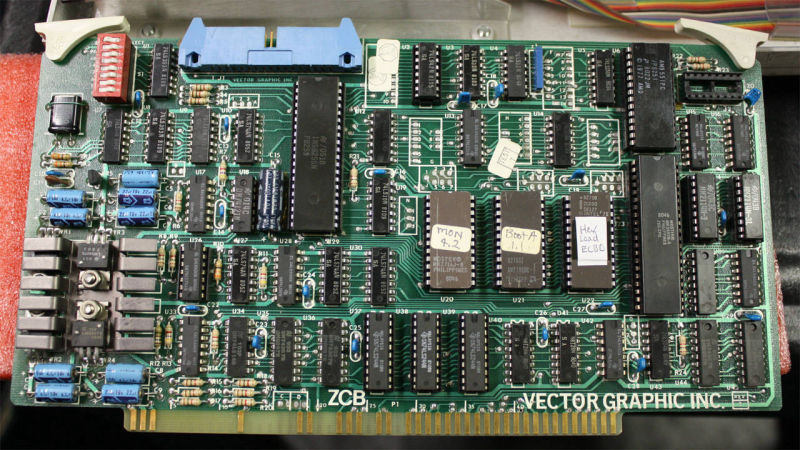 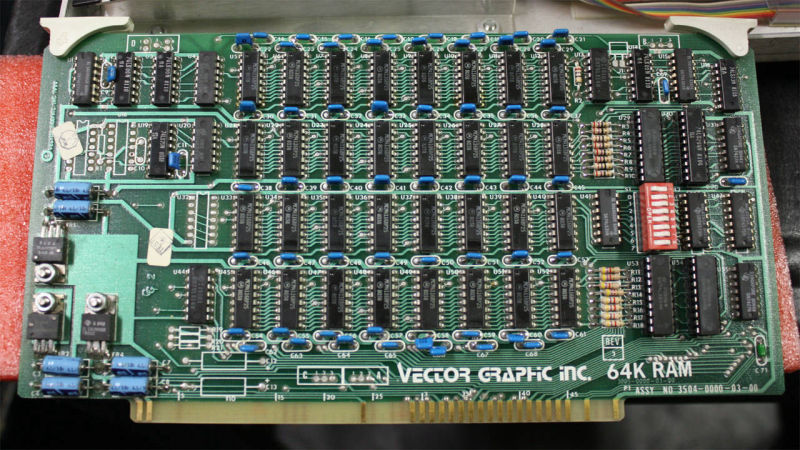 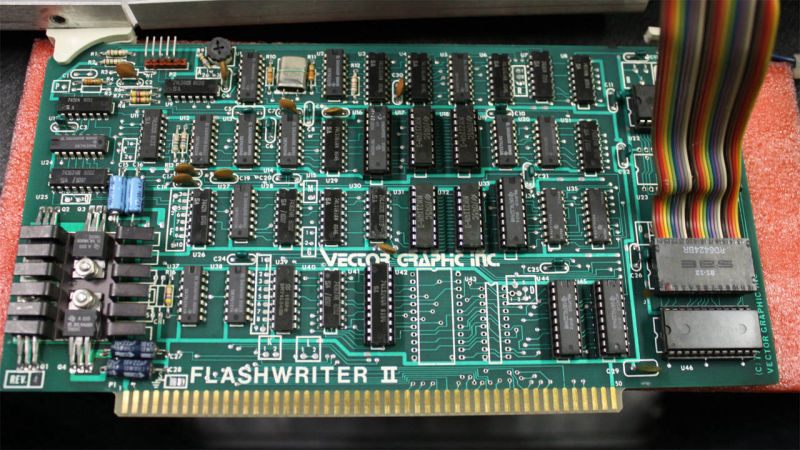 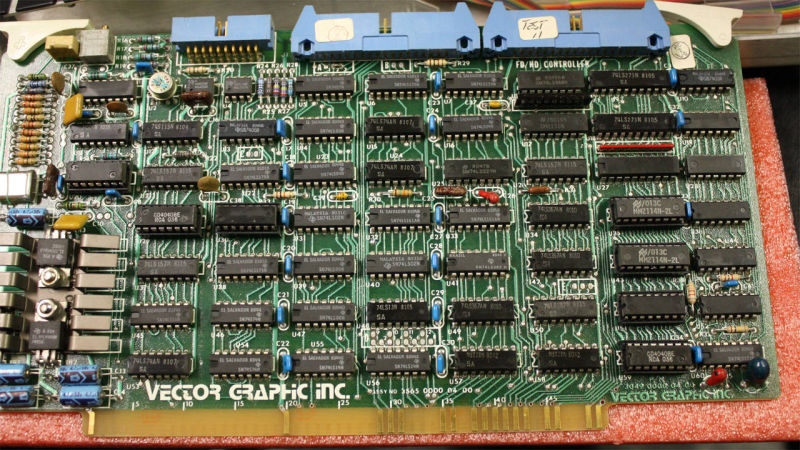 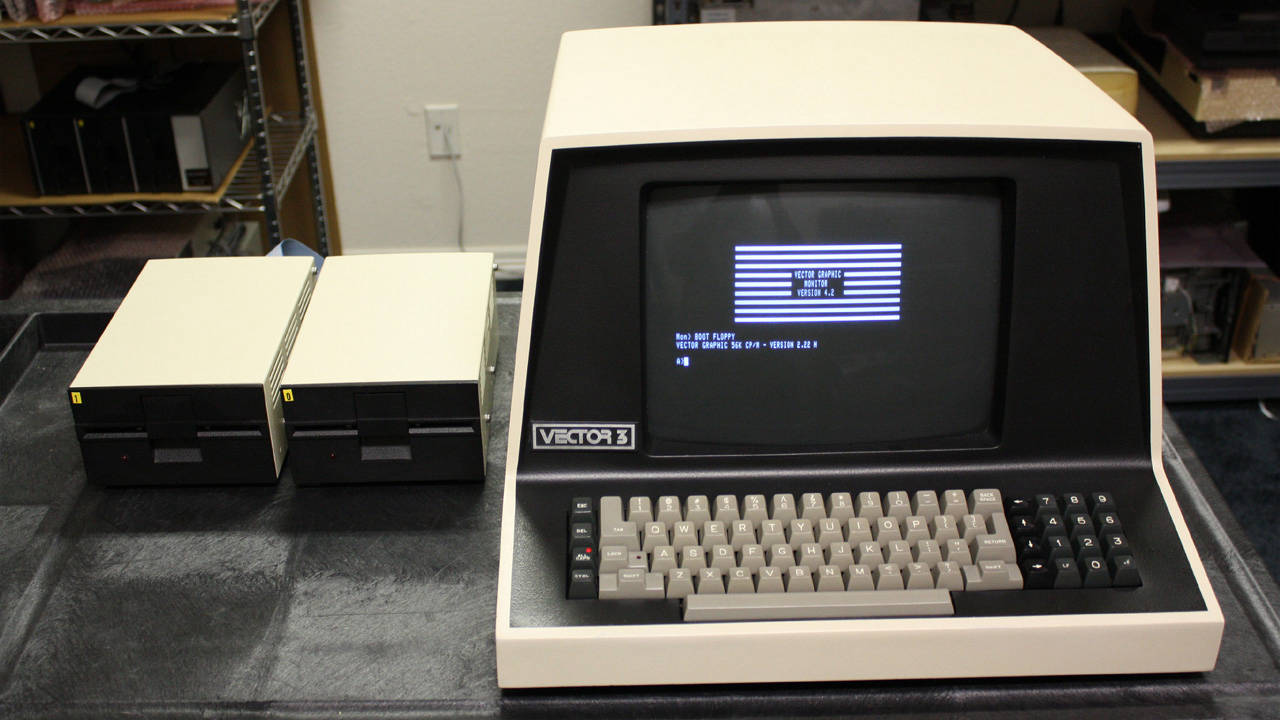 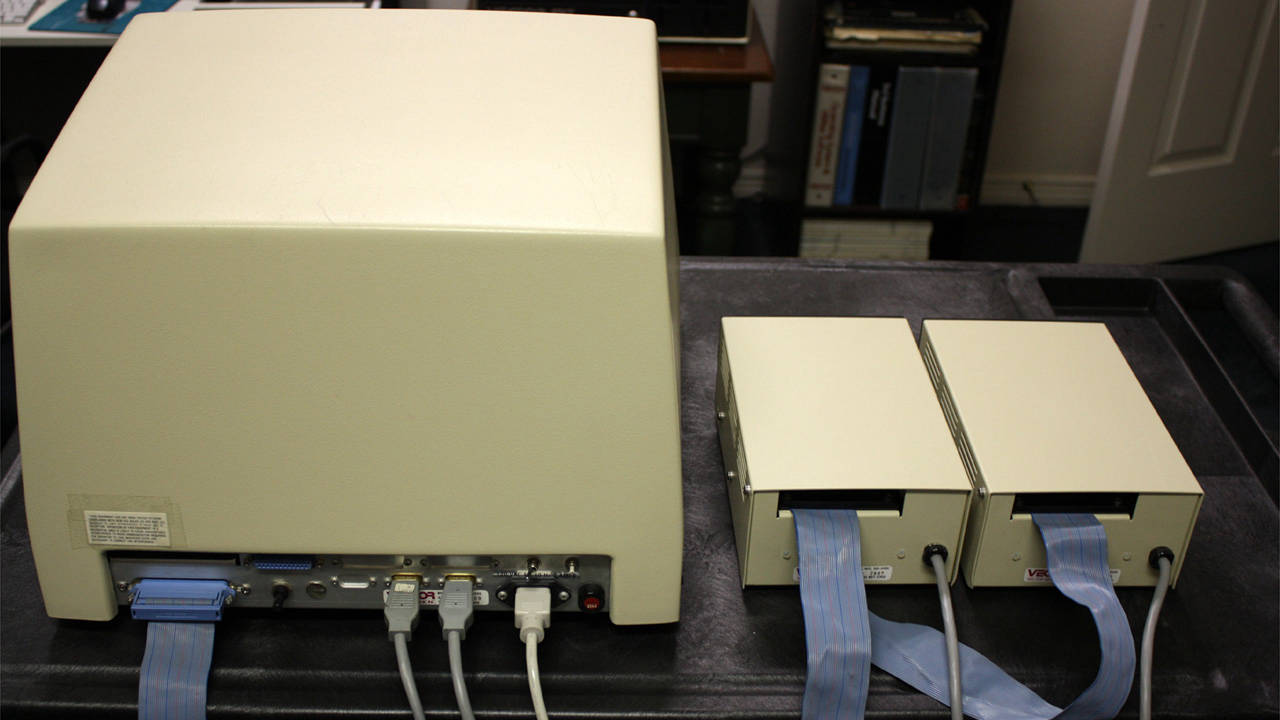 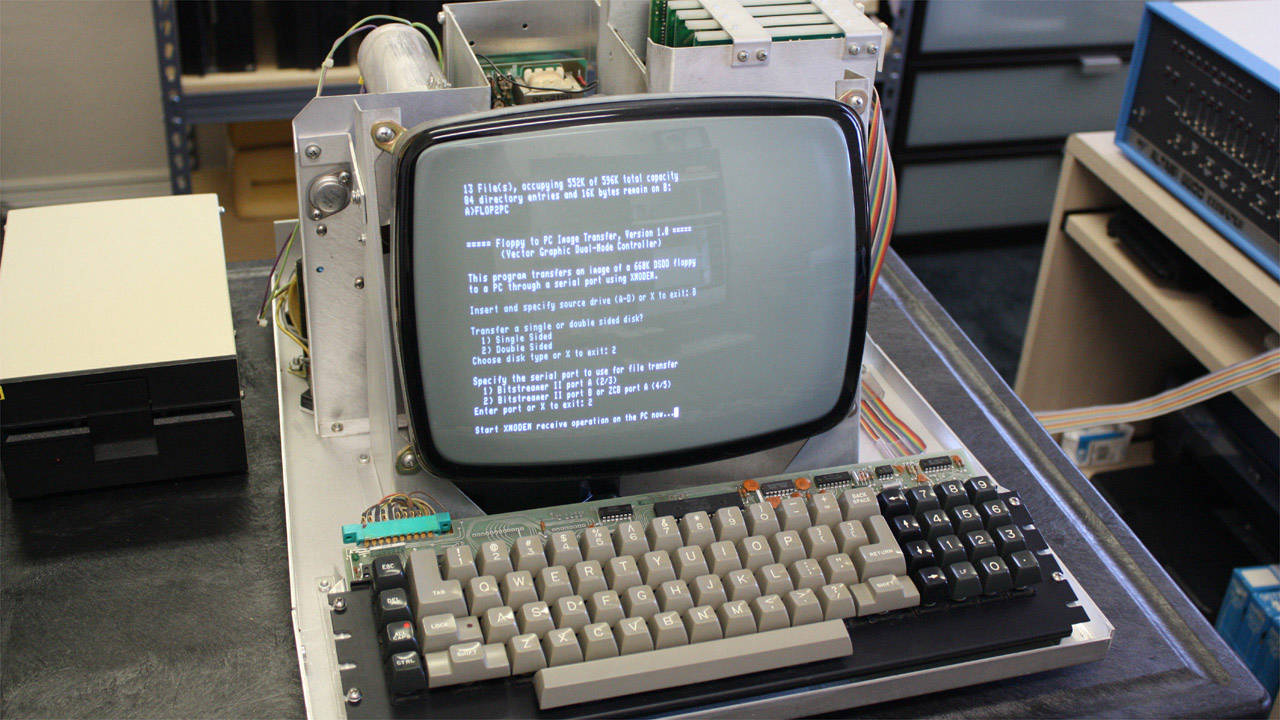 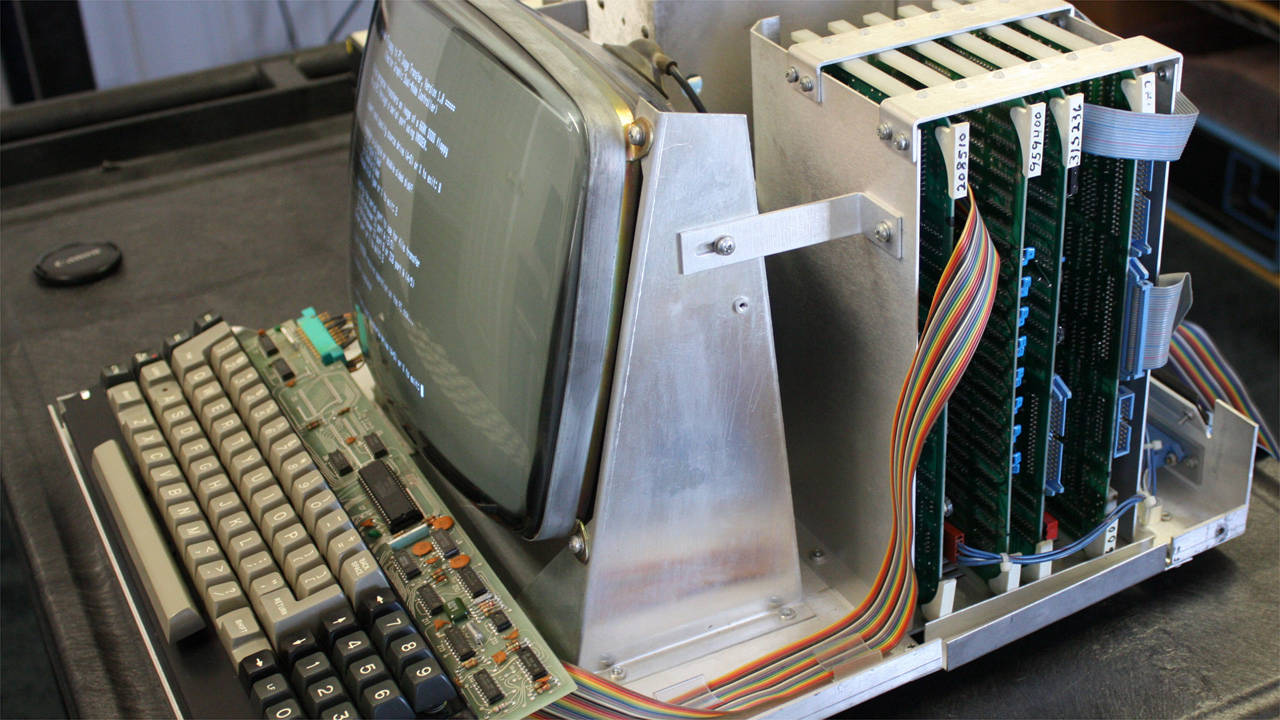 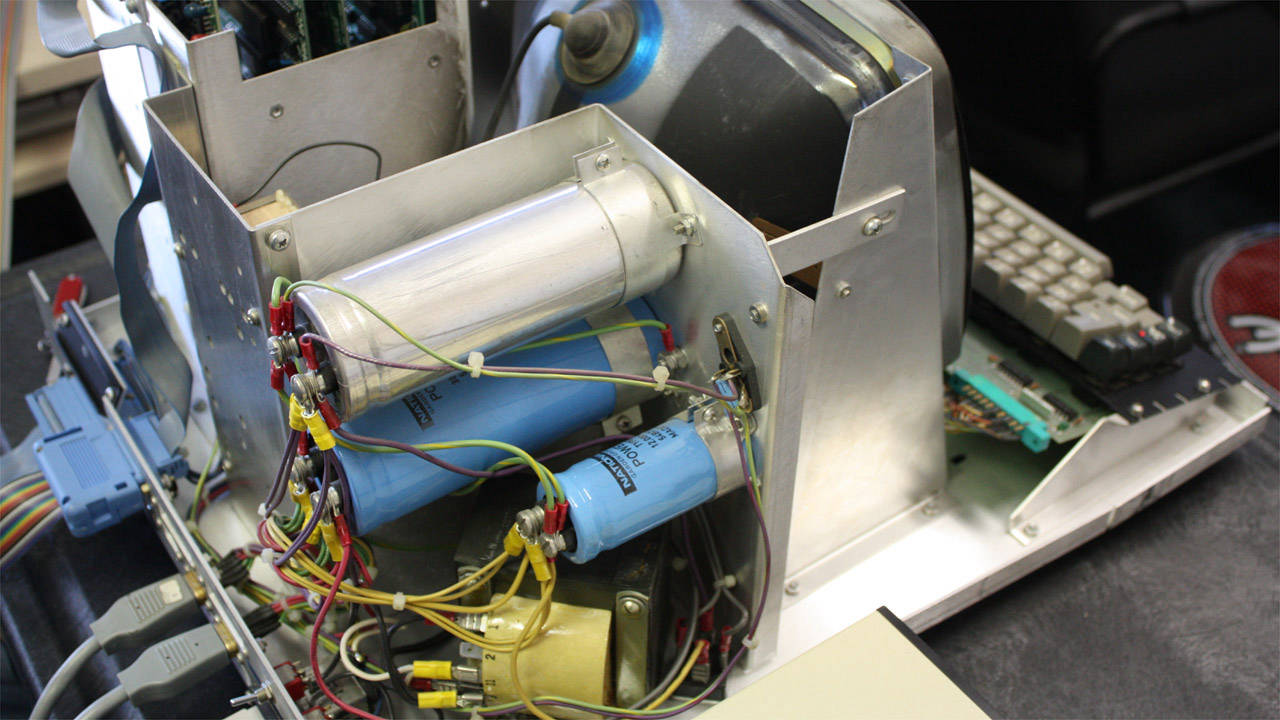 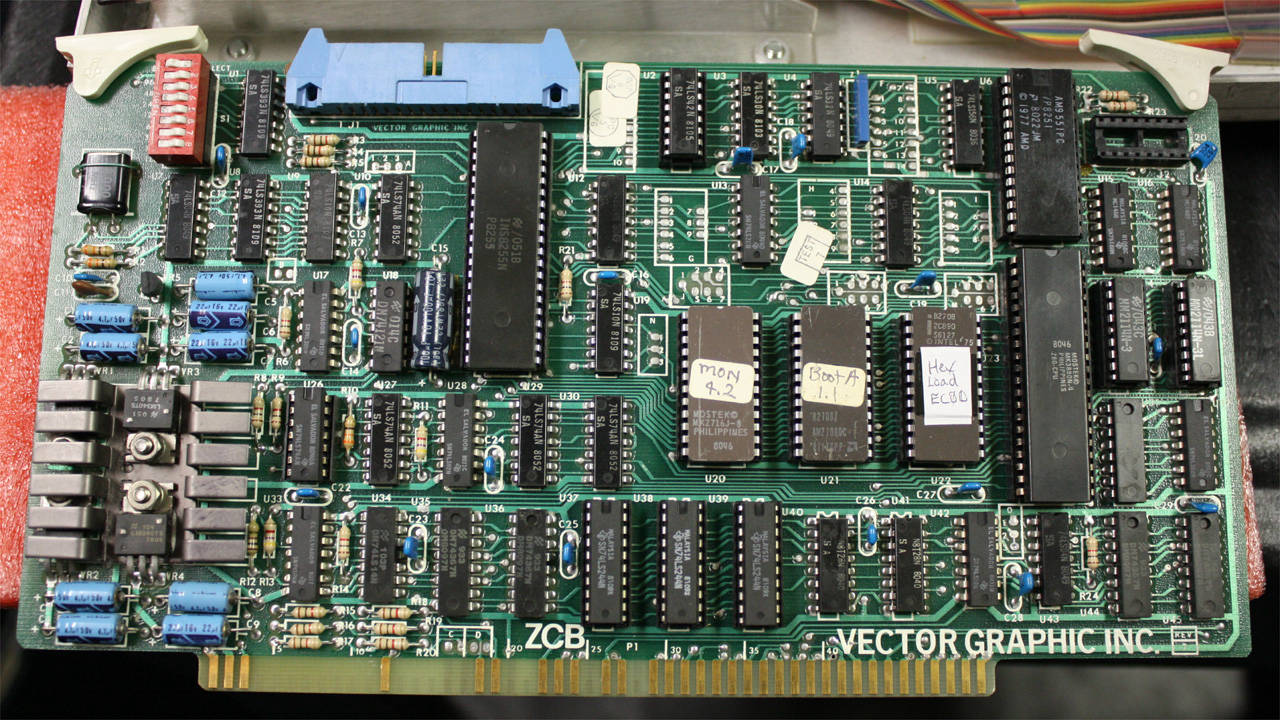 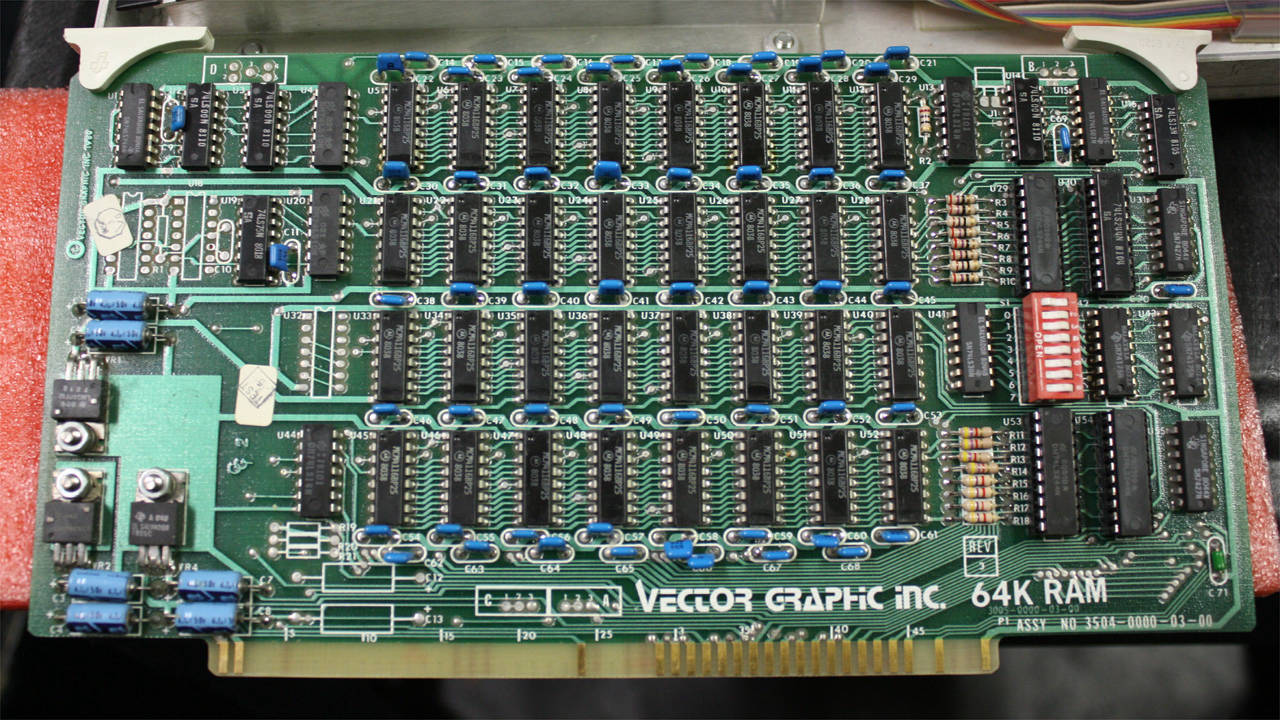 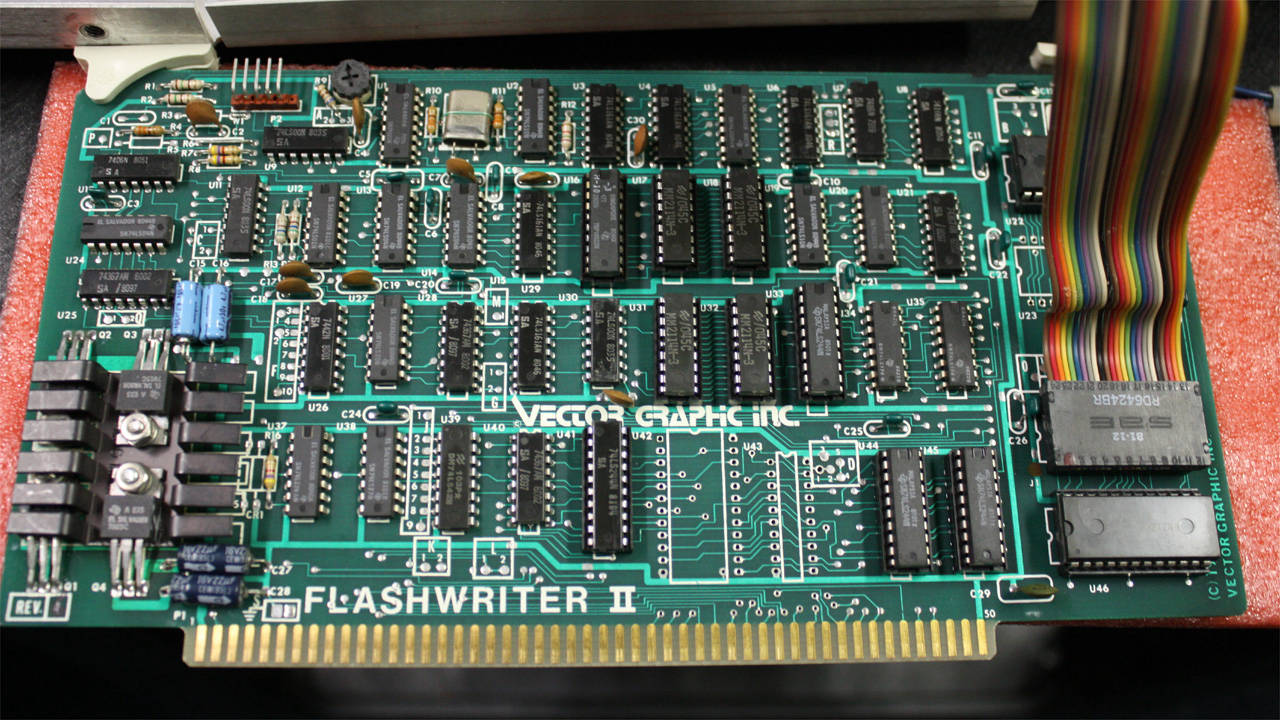 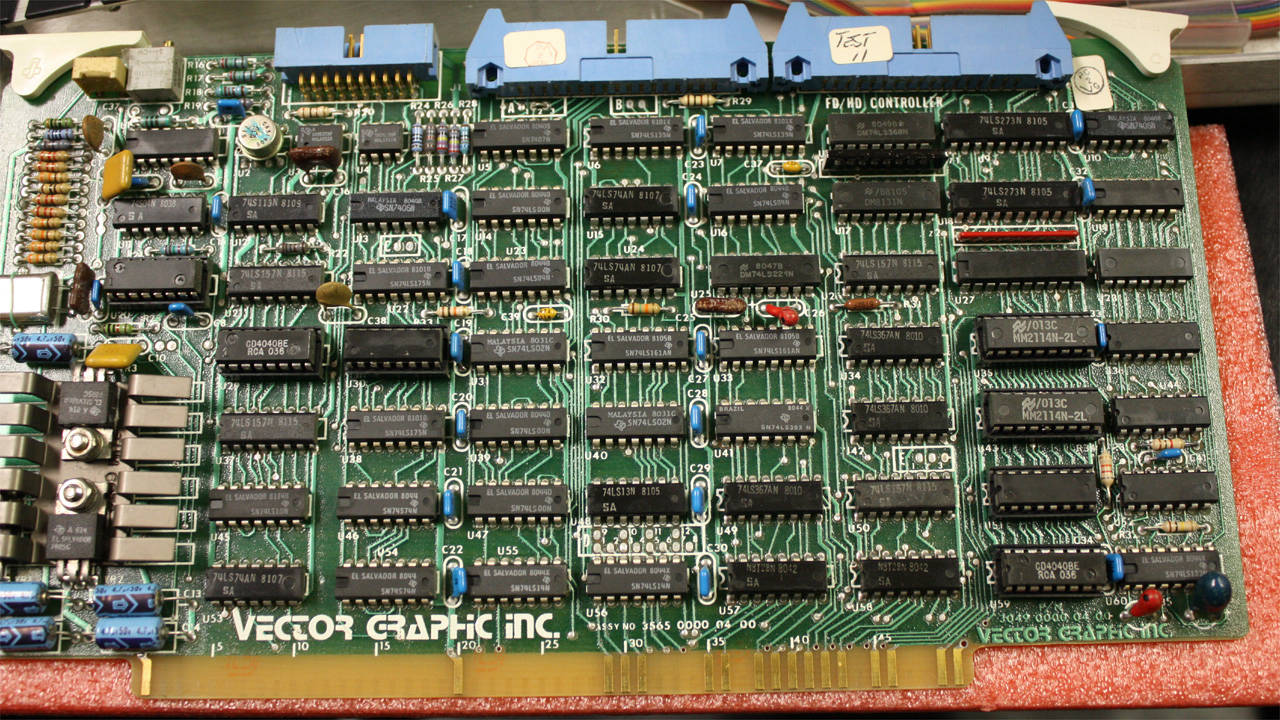 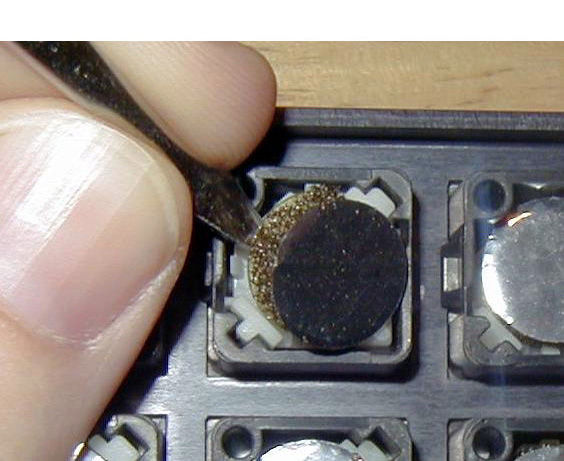 The keyboard in the Vector 3 is a capacitive keyboard made by Keytronics These keyboards have a great feel, but unfortunately, the foam pad present in each key deteriorates over time and virtually all keyboards of this type and vintage do not work properly (if at all). A good source for replacement pads is a Sun "Type 4" keyboard. Even though the Sun keyboards are just ten or so years newer than the Vector keyboard, they use a different type of foam that doesn't break down so quickly. Search the internet for "Sun keyboard" followed by "320-1018". This is a French Canadian version of the keyboard and is the most readily available and least expensive version. In addition to replacing the foam pads, I gently sanded the key "capacitors" on the bare PCB with a very fine grit sandpaper (600) and then wiped the board clean. Based on past experience, this step reduces the likelihood that some of the key positions may still not work.  (photo courtesy of sol20.org)

Pictured below is a Vector Graphic MZ computer. The heavy duty chassis and large power supply of the MZ was utilized in a number of systems sold by Vector Graphic. It was often referred to in Vector Graphic manuals as "the mainframe."  The MZ was the first Vector Graphic computer I purchased and restored. This computer was received with a fairly typical board configuration as itemized in the list below. The CPU, RAM, and Flashwriter II boards are the same as shown with the Vector 3 computer (see pictures above). Pictures of the Micropolis floppy controller and Bitstreamer II are below.

The earliest versions of the Vector Graphic MZ ran MZOS, an upward compatible version of North Star DOS. This was followed by the more powerful MDOS by Micropolis, and finally, CP/M became the standard. 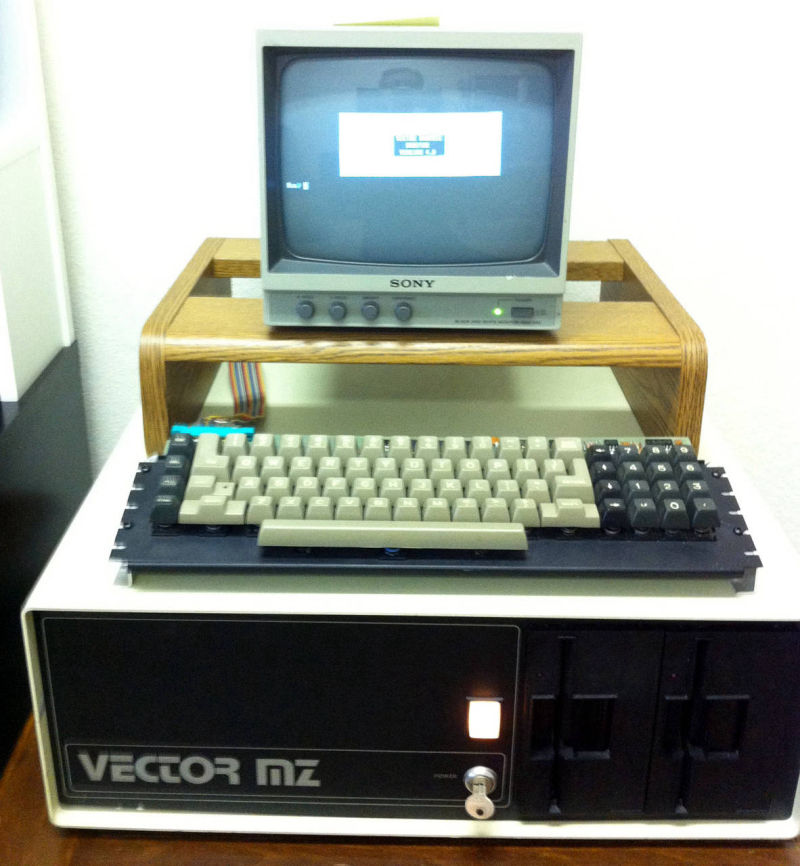 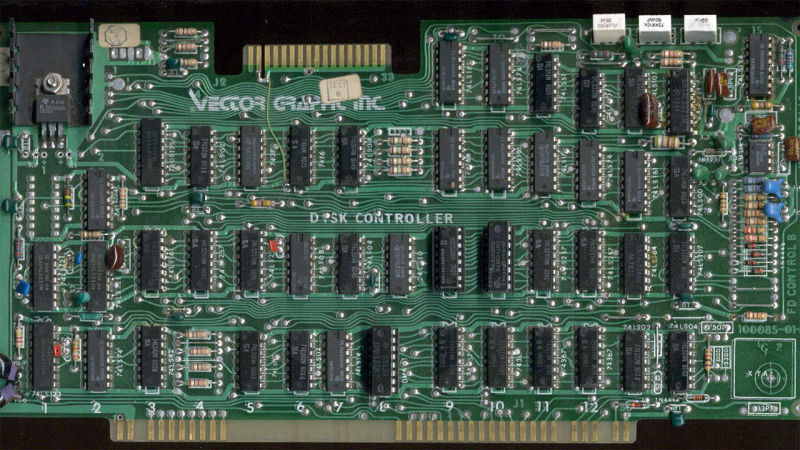 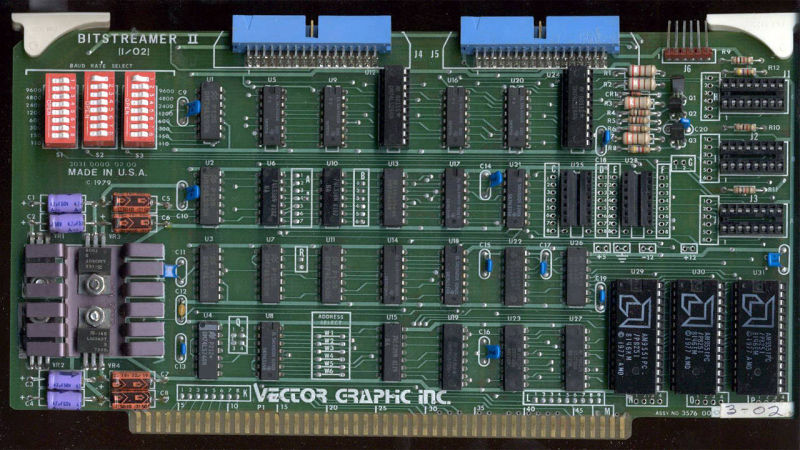 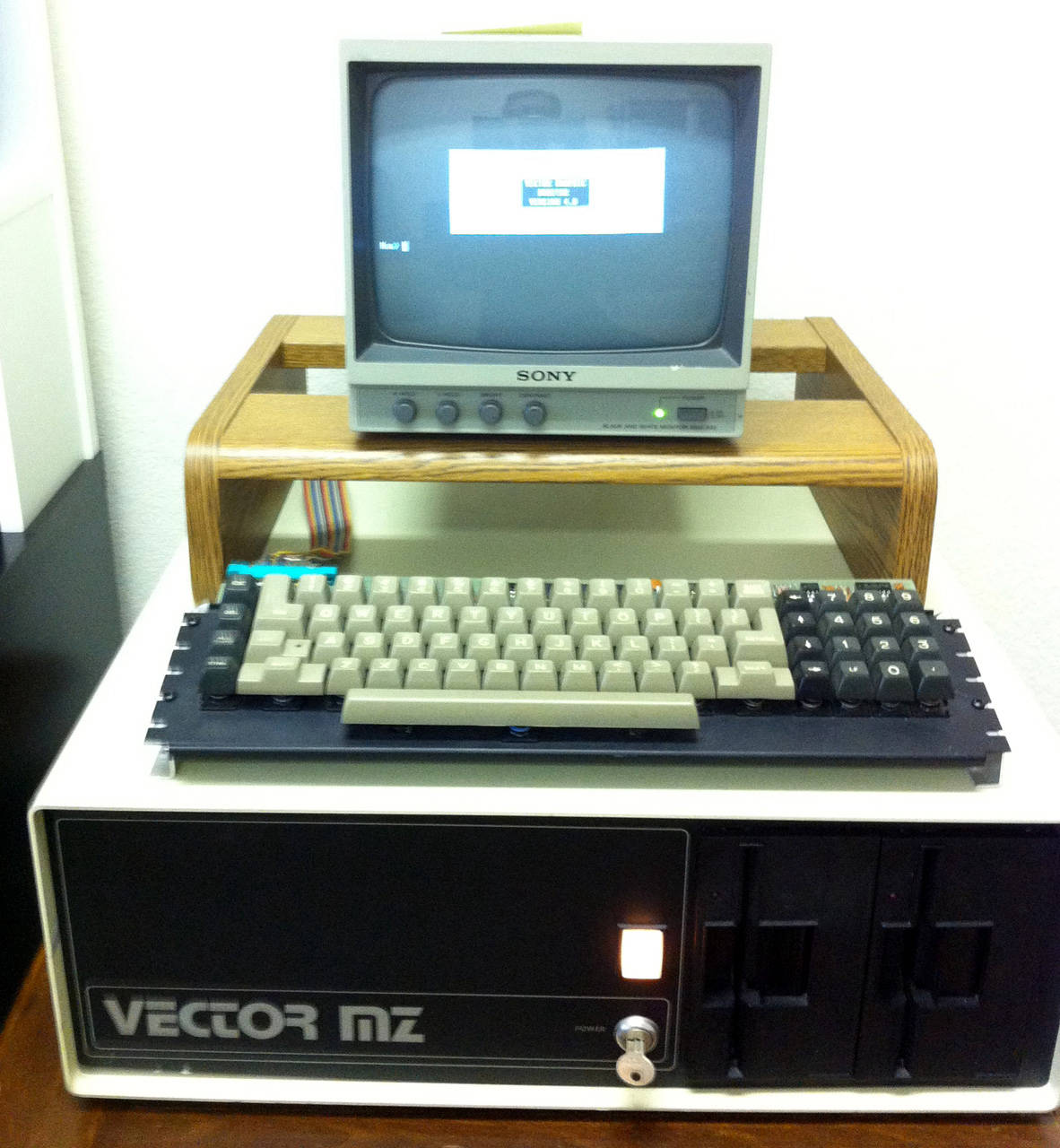 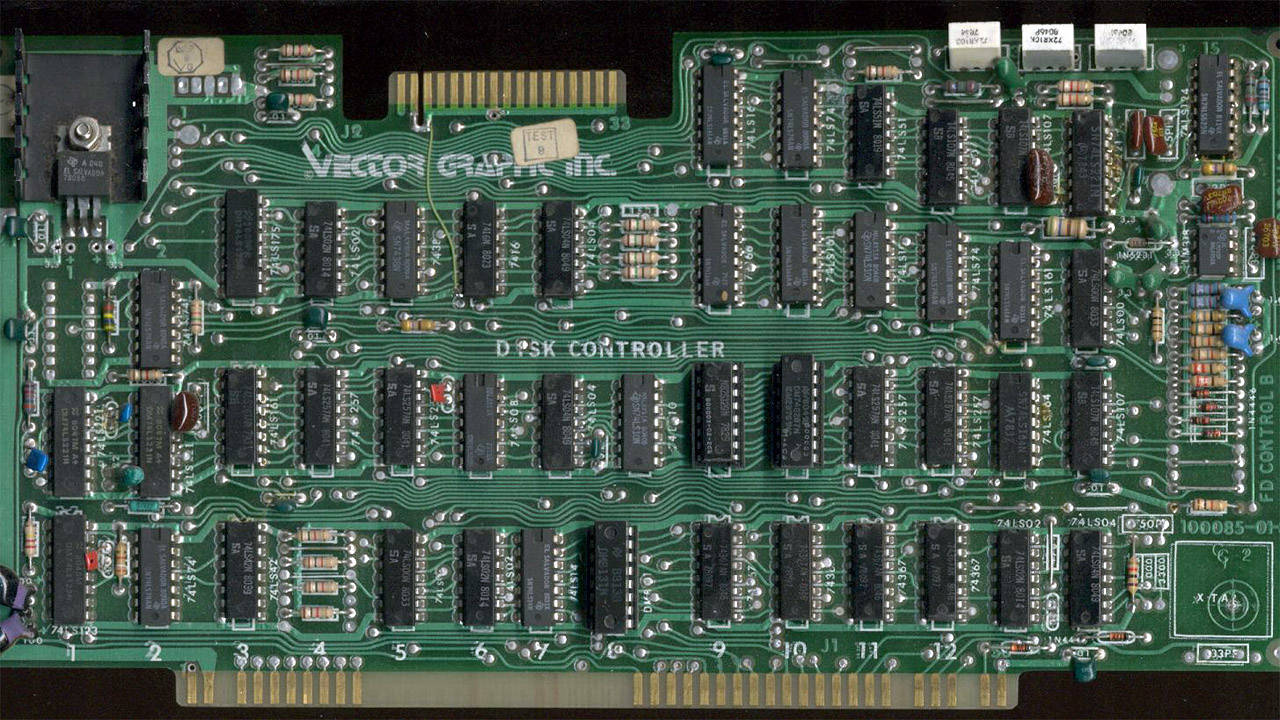 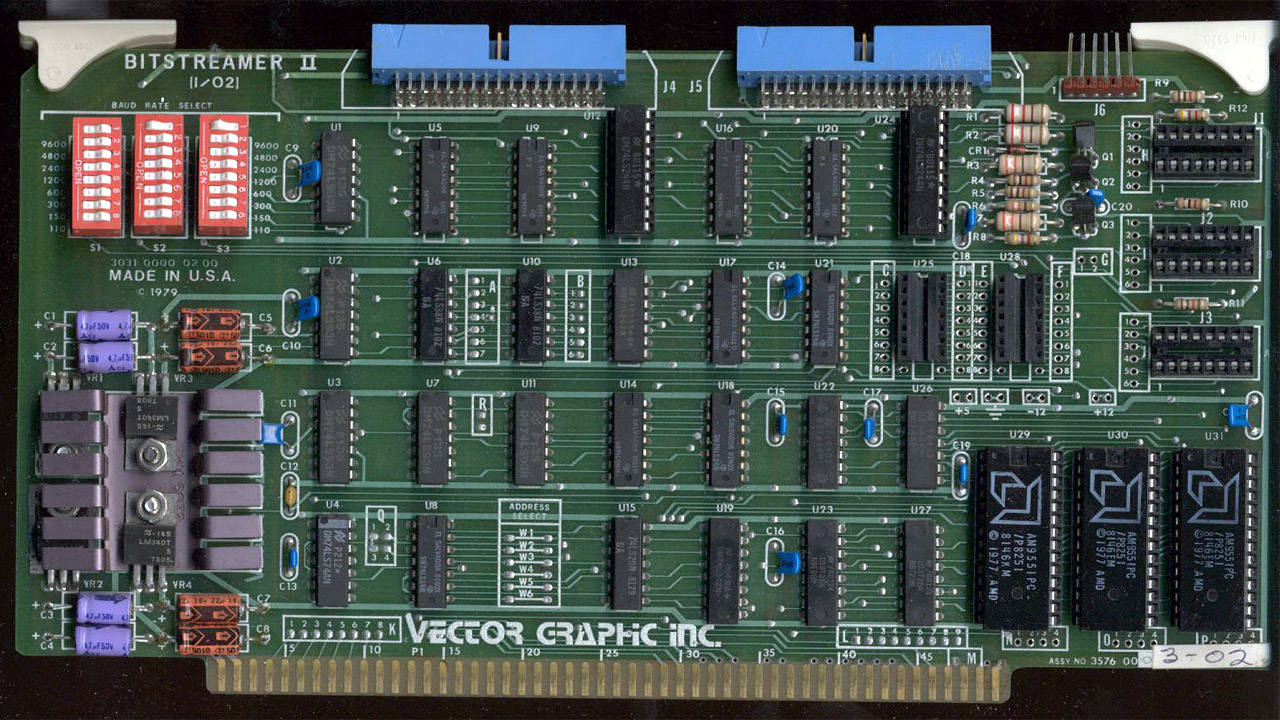 One of the drives most commonly used with Vector Graphic computers was the 5.25" Micropolis 1015-II drive. This drive was one of the first to double track density from the 48tpi to 100tpi. The industry eventually settled on 96tpi for high density track spacing since it provided upward compatibility from 48tpi drives. With double density data and double density track spacing, the Micropolis hard-sectored floppy controller and drive provided two to four times the capacity of other 5.25" floppy drives at the time.

Vector later upgraded to the 5.25" Tandon 100-4M floppy drive in their systems. Like the Micropolis drive, the Tandon was also 100 tpi, but the Tandon drive was double-sided providing twice the capacity of the Micropolis drive. The Tandon drive also provided a 10x improvement in seek time with a faster step interval of just 3ms compared to 30ms for the Micropolis. The controller used with the Tandon drives was a hard sector controller like the Micropolis and duplicated the Micropolis disk layout. This allowed the Tandon drives to read and write single sided disks for exchange with Micropolis drives.
In addition to the 5.25" drives, Vector Graphic also sold a soft-sectored 8" controller with dual Qume 842 DataTrak floppy drives. Each DSDD drive provided 1mb of storage and a fast step interval of 3ms. However, Vector Graphic sold very few systems with the 8" drive, focusing instead on 5.25" floppy and hard disk configurations.
I restored each of the Vector Graphic computers and drive sub-systems without having bootable media. For each floppy controller/drive combination (Micropolis, Tandon, and Qume), I wrote a utility, PC2FLOP, that runs on the target machine and writes a floppy from a disk image received through a serial port using the XMODEM protocol. Numerous Micropolis and Tandon disk images were available online when I did the restorations.
For the Qume (8 inch) configuration, I could not find any disk images online. A hobbyist had one original Vector Graphic CP/M 2.2 disk for the 8 inch controller, but did not have a system on which it could be run or duplicated. To make sure my computer, disk controller, and Qume drives were all working properly before putting an original disk at risk, I wrote a custom CP/M 2.2 BIOS to support the 8 inch controller. Once the hardware was proven to be working fine, I wrote a FLOP2PC utility to archive the Vector Graphic disk to a PC. These disk images, disk transfer utilities, software and more are available in the Resources section below.

Made with Mobirise ‌