Like having an Altair 88-2SIO and Turnkey Board in One

The 88-2SIOJP is an enhanced, drop-in replacment for the Altair 88-2SIO serial interface board. The 2SIOJP also adds auto-jump (power-on and reset), up to 16K of PROM space, and more.

The serial ports are designed around the Motorola 68B50 ACIA. The data rate for each serial port is set by a DIP switch, allowing communication from 110 baud through 76.8K baud. For comparison, the original 88-2SIO has a maximum baud rate of 9600 baud and requires wire jumpers to change baud rates.

Either serial port can be set up for RS-232 (with optional hardware handshaking), Teletype (20 mA current loop), or TTL communication. These settings are easily configured with push-on jumpers instead of the confusing maze of wiring options on the original 88-2SIO.

Two options are available for connecting the 88-2SIOJP serial port to DB-25 connectors on the rear panel:  1) The same 10-pin Molex 0.156” connector used on the original 88-2SIO, or 2) A 26 pin header that allows use of an off-the-shelf DB-25 ribbon cable assembly.

The EPROM socket supports 2716 (2K x 8) through 27128 (16K x 8) EPROMs, as well as equivalent EEPROMs. The starting address for the EPROM is set with a DIP switch. EPROM access requires zero wait states, unless your CPU board generates wait states.

If an EEPROM is installed, then writing to the EEPROM may be enabled or disabled with a jumper.

The EPROM can be completely disabled with a DIP switch.

When the Automatic EPROM Disable feature is enabled, the EPROM is available to the CPU after reset and until the first IN instruction from port 0FFh (which is the Altair front panel’s switch register). Once the CPU inputs from this port, the EPROM is no longer available, and overlaid RAM at the same address becomes available to the CPU. This feature is equivalent to the automatic EPROM disable feature in later versions of the MITS 8800b Turnkey board which allowed Altair BASIC to run in a full 64K of RAM.

•  MWRITE signal generation (for any computer without a front panel)
•  Pullup resistor for -SSW DBL signal (S-100 pin 53)
•  Sense Switch register (for software that requires sense switches)
•  A Turnkey Interface that connects directly to an Altair 8800bt, replacing the 8800b Turnkey Module
•  The Turnkey Interface also provides easy connection for a reset switch and a few status indicators for use in any non-Altair system without a front panel.

When the Jump Start feature is enabled, a system reset causes the 88-2SIOJP to force a jump to the address specified on the jump start DIP-switch. The jump start is implemented in one of two ways (DIP-switch selectable) :

2) The 88-2SIO generates the Phantom signal on the bus, which will disable Phantom compatible S-100 memory boards, though not any MITS memory boards.

The Power-On Clear circuit on the Altair 8800 and 8800a CPU board does not reset the 8080 processor, requiring you to toggle the Reset switch on the front panel of these machines after power-on. MITS fixed this problem in the Altair 8800b by asserting Reset, synchronized with the system clock, during power on.

The 88-2SIOJP comes with either MITS Extended ROM BASIC, or with AMON, a full-featured ROM monitor. Neither ROM is required, however, and the ROM socket can be disabled with a DIP switch.

AMON is programmed into a 2732 (4Kx8) EPROM, and uses the serial ports on an 88-2SIOJP, the original Altair 88-2SIO, or an Altair 88-UIO for I/O. AMON provides commands for manipulating memory, serial file transfer with a PC for loading and saving files into and out of memory (in Altair Absolute Binary format or Intel Hex format), as well as booting from any Altair boot device (paper tape, cassette tape, 8” floppy disks, minidisks, or from an Altair Datakeeper hard disk). AMON can also be used to program EPROMs when using a memory-based EPROM programmer such as any of the Cromemco Bytesavers.

The 88-2SIOJP is designed and sold by Martin Eberhard. The cost is $125 plus shipping. To purchase, contact Martin by email at mfeberhard followed by ASCII 0x40 followed by the Google email domain name.

The 88-2SIOJP comes fully assembled and tested in either the M156 or the R100 configuration as pictured below. Comes with either the AMON monitor or MITS Extended ROM BASIC in the onboard EPROM. 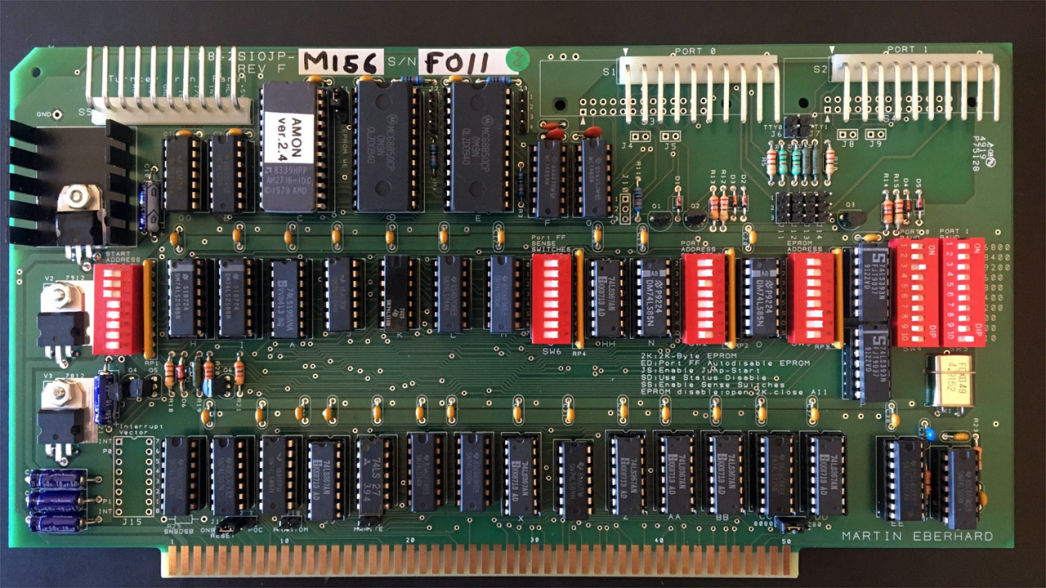 Populated with the same white Molex connectors used on the original 88-2SIO for connecting to DB-25's in the rear panel. 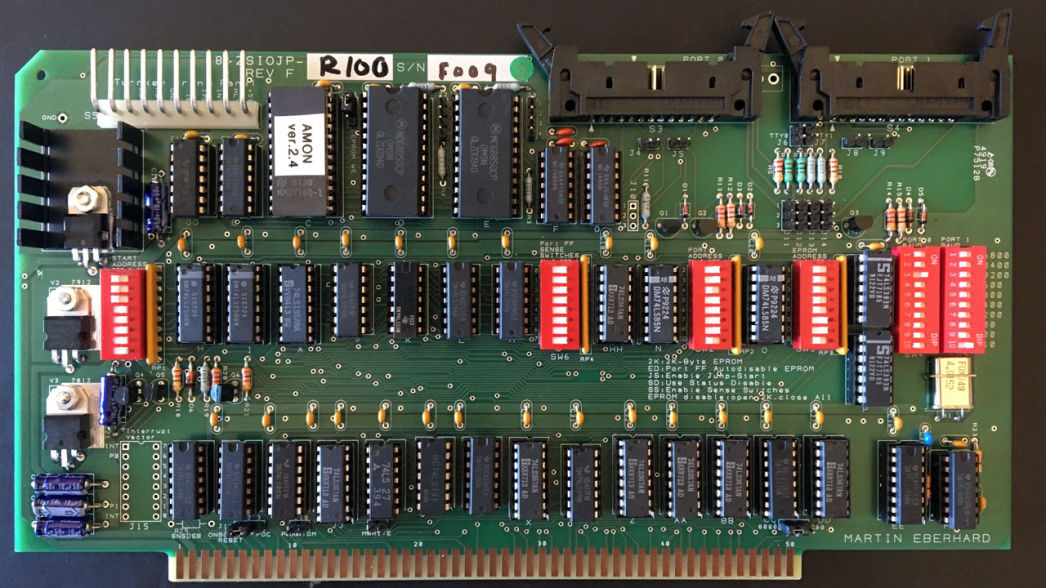 Populated with standard 26 pin headers that allow use of an off-the-shelf DB-25 ribbon cable to connect the 88-2SIOJP to the rear panel DB-25 connectors.